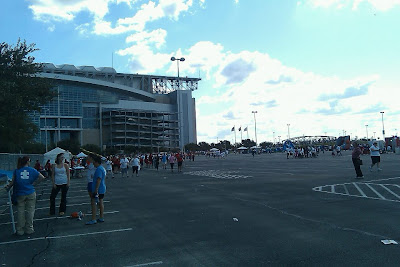 I've had a bit of a technological problem with the videos recorded in Michigan. Apparently DSL really is slow and it's caused my MI based camera man to be unable to upload anything, but I went out yesterday afternoon in Texas and recorded some brand new videos to put up this Thursday.

The 1994 Tour continues on. I'm in the middle of four shows in three weeks, how exciting! This is perhaps the busiest I've ever been and it's such a nice kind of busy. I had a show on Saturday at the Autism Walk at Reliant Park. This is the first walk I've been involved with that had no grass in sight, just a parking lot and Reliant Stadium blocking out the sun!

I had a blast and I say that at each show, but it's still true. I made it snow, which is something that I've been claiming to do for years and finally saw my chance to make it happen! I read some minds, bent some forks, and got kidnapped by some mascots to do magic for thirty minutes in their bus!

November is fast approaching which gets me excited for my next #SecretShow! The first #SecretShow went much better than I expected. I picked out a nice performance spot, got to practice some material, and also met my current Texas camera man. So I can't wait to see when, where, or what the next #SecretShow will be!

Until then, thanks for subscribing, liking, following, sharing, and watching. I'm going to get to sleep by listening to some Sea Change by Beck.
Email ThisBlogThis!Share to TwitterShare to FacebookShare to Pinterest