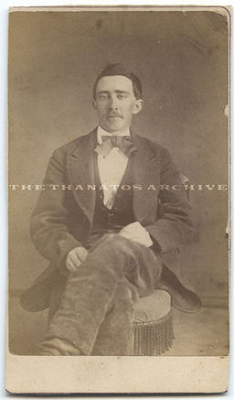 I always knew there was something off about Nicolas Cage, and not just his drunk and disorderly behavior, penchant for wacko baby names, or his eyebrows. I mean, that's like every other celebrity you throw a rock at on the street. Isn't it strange that the supposedly 47-year-old actor looks virtually unchanged since his first big hit Moonstruck all the way back in the '80s? Well, Jack Mord and I don't think so. And the Seattle photo archivist has a photo to prove it.

He claims the Civil War photo at left is none other than Nicolas Cage. And looking at it, there can only be three possible explanations:

1. It's a fake (Mord says it can be proven authentic).

2. It's a guy that just really looks like Cage, and Cage's youthfulness is due to plastic surgery tips he picked up from his co-star Cher while filming Moonstruck.

3. The photo proves Nicolas Cage is really a vampire!

I'll admit there are some holes in this theory. For some reason, Mord's auction of the photo on eBay today (for a cool $1 mil) was either pulled by the site or Mord himself, but not before explaining the origins:

Read More...
Email ThisBlogThis!Share to TwitterShare to FacebookShare to Pinterest