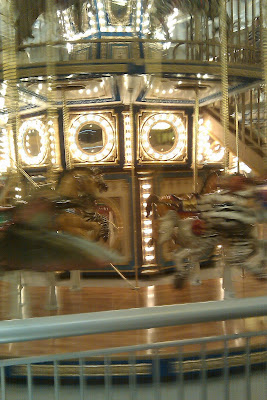 Today is essentially the one year anniversary of the idea of me moving to Texas. I had considered it sometime around May or so of last year, but July 22nd is the day that truly set this path in motion. To celebrate that anniversary, I took my girlfriend to the circus. In the end, it feels quite fitting.

On the drive home I thought of how I had just seen the impossible. I saw a girl juggle fire while being suspended twenty some odd feet off the floor by her hair, I saw body benders, uphill tight rope walking, an elephant that can paint, and so much more during the Greatest Show on Earth.

The impossible. It's what a move from home felt like.

I can't believe how long of a year it has been. The last three months have felt so quick, but anything before that feels like a lifetime ago. I'm looking through an old folder of pictures on my computer to find a photo to go with this blog and it just reminds me of how long this relationship between me and Jordan has gone on. From "meeting" on Beck's MySpace in December of 2005, to our first phone call in March the next year. Finally, in October of 2006 we met and it's crazy, but we met here...somewhere around where I am now, it's just down the freeway. You can't help but miss the trips sometimes! That is probably the downfall of long distance relationships. We would see each other one week every two to four months and you would have to fit that entire time into those seven days.

I do miss the absolute thrill and nervous excitement of seeing her at the airport. Luckily, however, it's not the trips that I miss. I do miss the places we went to, but I'll see them again. It's the time we spent living together that I really miss. I think it's a fairly human trait to always want more than what you've got. The grass is always greener on the other side, they say. For me, it's not wanting my grass greener, it's just wanting more grass!

That week that she came to see me in 2009 and then never left...that was amazing. That was impossible. I showed her off to everyone that week. I can remember the sun, the chilled air, the jacket I wore, everything. Such an amazing time. Ahhhh...Isn't life wonderful?!
Email ThisBlogThis!Share to TwitterShare to FacebookShare to Pinterest